The War of Art

Every procrastinator like me should read this book, but before you run and pick one up, be warned—it is written in a very unusual way. First two books (let’s call them chapters) are motivating and full of identifying what Resistance is and how to overcome it. Those two were most valuable to me. The third chapter is almost religious, which didn’t much resonate with me, but I can see Steven’s point of which I do agree. Somewhere on page 20, I started to treat the book as a provocative thinking stimulus; I think this is the right way to tap into a value of the book. If you skim through the book fast, the general gist of it is “just do your work and angels will guide you,” which is not very helpful.

If you, much like me, are not a religious, I’d recommend Flow as a prerequisite for this book. I might find interesting linking them in chapter three of this book.

The final word on the book, the object, itself. I read a Kindle edition which I assume mirrors print version, and it is typeset in an awful way. Bold, center aligned, unreasonably large text through the whole book! Ugh.

Resistance is the most toxic force on the planet. It is the root of more unhappiness than poverty, disease, and erectile dysfunction.

[…] it was easier for Hitler to start World War II than it was for him to face a blank square of canvas.

The more important a call or action is to our soul’s evolution, the more Resistance we will feel toward pursuing it.

Procrastination is the most common manifestation of Resistance because it’s the easiest to rationalize.

Creating soap opera in our lives is a symptom of Resistance. Why put in years of work designing a new software interface when you can get just as much attention by bringing home a boyfriend with a prison record? Sometimes entire families participate unconsciously in a culture of self-dramatization. The kids fuel the tanks, the grown-ups arm the phasers, the whole starship lurches from one spine-tingling episode to another.

If you find yourself criticizing other people, you’re probably doing it out of Resistance. When we see others beginning to live their authentic selves, it drives us crazy if we have not lived out our own. Individuals who are realized in their own lives almost never criticize others. If they speak at all, it is to offer encouragement. Watch yourself. Of all the manifestations of Resistance, most only harm ourselves.

The opposite of love isn’t hate; it’s indifference.

Grandiose fantasies are a symptom of Resistance. They’re the sign of an amateur. The professional has learned that success, like happiness, comes as a by-product of work.

Friends sometimes ask, “Don’t you get lonely sitting by yourself all day?” At first it seemed odd to hear myself answer No. Then I realized that I was not alone; I was in the book; I was with the characters. I was with my Self.

Rationalization is Resistance’s right-hand man. Its job is to keep us from feeling the shame we would feel if we truly faced what cowards we are for not doing our work.

If Resistance couldn’t be beaten, there would be no Fifth Symphony, no Romeo and Juliet, no Golden Gate Bridge.

I’m keenly aware of the Principle of Priority, which states (a) you must know the difference between what is urgent and what is important, and (b) you must do what’s important first.

The amateur has not mastered the technique of his art. Nor does he expose himself to judgment in the real world. If we show our poem to our friend and our friend says, “It’s wonderful, I love it,” that’s not real-world feedback, that’s our friend being nice to us. Nothing is as empowering as real- world validation, even if it’s for failure.

The amateur believes he must first overcome his fear; then he can do his work. The professional knows that fear can never be overcome. He knows there is no such thing as a fearless warrior or a dread-free artist.

The professional conducts his business in the real world. Adversity, injustice, bad hops and rotten calls, even good breaks and lucky bounces all comprise the ground over which the campaign must be waged. The field is level, the professional understands, only in heaven.

There’s no mystery to turning pro. It’s a decision brought about by an act of will. We make up our minds to view ourselves as pros and we do it. Simple as that.

Because when we sit down day after day and keep grinding, something mysterious starts to happen. A process is set into motion by which, inevitably and infallibly, heaven comes to our aid.

When we conceive an enterprise and commit to it in the face of our fears, something wonderful happens. A crack appears in the membrane.

The moment a person learns he’s got terminal cancer, a profound shift takes place in his psyche. At one stroke in the doctor’s office he becomes aware of what really matters to him. Things that sixty seconds earlier had seemed all- important suddenly appear meaningless, while people and concerns that he had till then dismissed at once take on supreme importance.

But the artist cannot look to others to validate his efforts or his calling. If you don’t believe me, ask Van Gogh, who produced masterpiece after masterpiece and never found a buyer in his whole life.

When the hack sits down to work, he doesn’t ask himself what’s in his own heart. He asks what the market is looking for.

Pretty much a problem with all popular business models today.

How do we do our work? Hierarchically or territorially? If we were freaked out, would we go there first? If we were the last person on earth, would we still show up at the studio, the rehearsal hall, the laboratory?

The enemy of the artist is the small-time Ego, which begets Resistance, which is the dragon that guards the gold. That’s why an artist must be a warrior and, like all warriors, artists over time acquire modesty and humility. 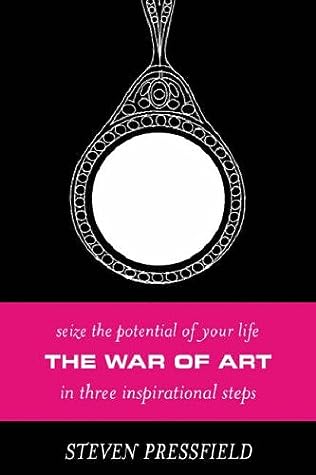